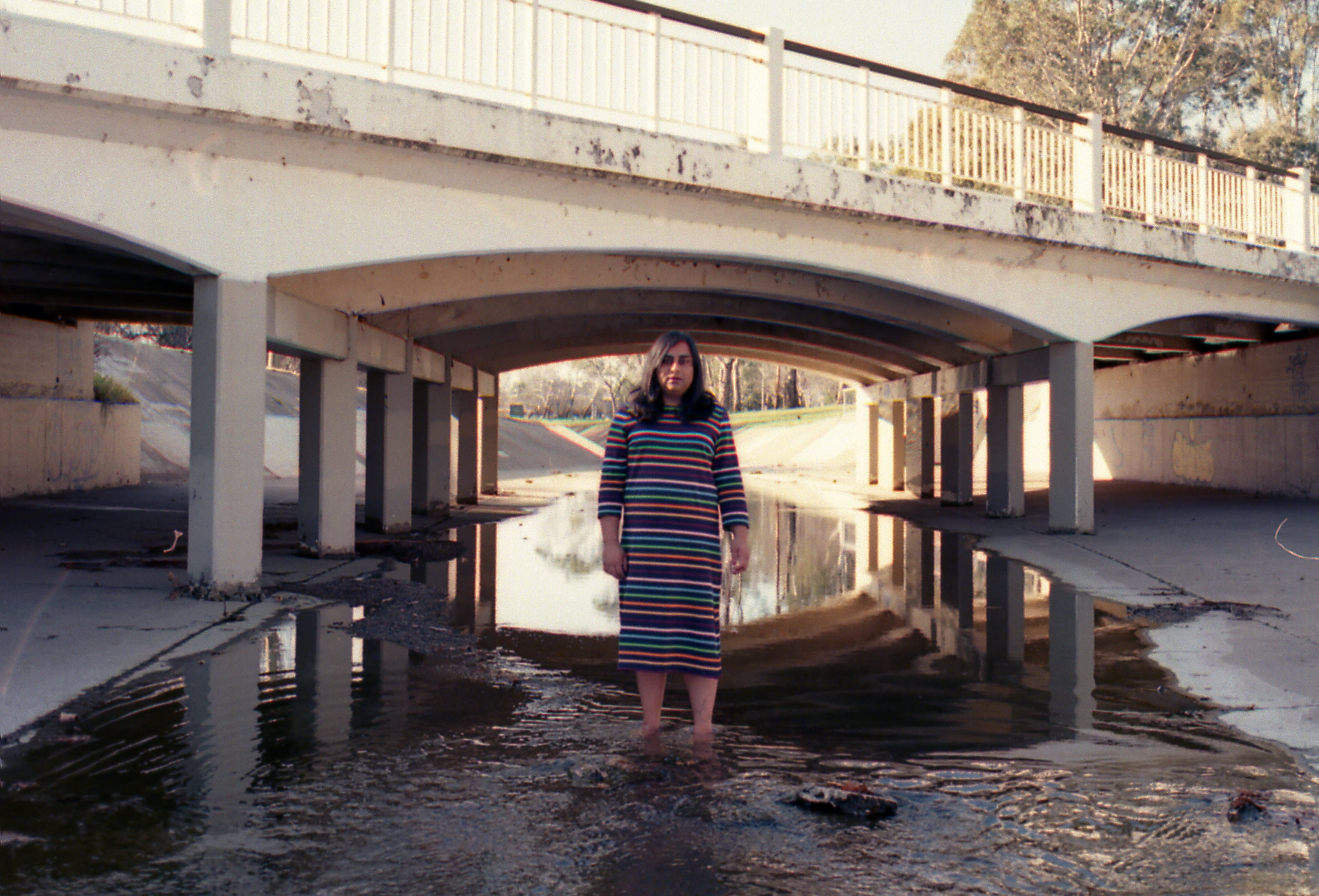 Shoeb Ahmad is a singer, composer, improviser and producer from Canberra, Australia. Active since the late ‘90s, she has released several albums under her own name, as well as with the bands Agency, Spartak and Tangents. She takes a punk approach to experimentation, rupturing pop and indie songs with feedback, drones and electronics. She’s contributed sound design and soundtracks to live theatre and dance projects, and more recently, has been working on installation pieces and composition for chamber ensembles, taking inspiration from 20th Century avant-classical works, Indian ragas and minimalist electronic music. She’s also a member of the improvised music group Sensaround with pianist Alister Spence and GIO’s Raymond MacDonald. We spoke about her wide-ranging musical activities, and her love of the Glasgow music scene.

Can you tell us about your background and the music that inspired you growing up?

Shoeb Ahmad: I’ve been making music/sound art for the last 15 years or so - both as a solo artist under the name Shoeb Ahmad and in a myriad of groups and collaborations - from my home on Ngunnawal Country, which is one of many nations located on the Australian continent. I’m not tied down to any style of music in particular as I’ve always been interested in all kinds of sounds and sonic concepts. As a pre-teen, I was drawn to the guitar (my main instrument) through the sounds of early 80s and mid 90s U2 but I soon discovered hardcore punk and post-punk, all different groups and approaches. In particular, I was interested in femme-driven music like The Slits and The Raincoats, both of whom showed me what exploratory spirit could sound like.

What was your introduction to improvised music?

SA: Like most teenage punks, the first time I heard anything improvised was from the Sonic Youth canon. It spoke to me quite a bit as I wasn’t really any good at playing guitar but I loved hearing quite expressive sounds through amplification and something that felt quite visceral in the listening experience. Reading about their collaborations beyond their own records led me onto exploring a whole heap of musicians across the board. Other bands that had similar vibes for me were The Ex and Tortoise with their various connections to improvised music in their parts of the world.

You work in a wide range of contexts, from song to noise to improv to sound art. What connects them?

SA: I feel that my musicality comes across as the common thread in the various styles I make in. The idea of hijacking a guitar part with deconstruction in the middle of an indie rock thing or just playing straight rhythms against free music textures gives me a lot of joy. The sense of provocation in response to the musical situation helps me thrive with my own abilities.

Can you tell us about your new album A Body Full Of Tears?

SA: The last album I made was called “quiver” and was a therapeutic response to coming out as a transgender woman, helping me work through the questions of identity that were at the forefront of my mind. In addition to that album, I worked on a pair of installation works called ‘im/modesty’ and ‘broken-binary-brown’, both of which explored the same questions of identity.

All of this was done and dusted by the end of 2018 so as I thought about what the next work would be, I actually entered a world of creative uncertainty, not realising straight away that I was emotionally spent and unable to shake off the pressure of pursuing the ‘career’ aspect of being an artist. This consumed most of my 2019 but at the end of the year, I came to understand that the pressure was not warranted and that while the three works previous were big markers for me as an artist, they were heavy, personal things that needed to be done and unshackle the burden of expectation.

With this clarity in place, I didn’t expect to make anything this year but from the summer bushfire season through to the COVID-19 lockdown period here, I found myself going back to making music in a reflective way, with no overarching idea in mind, but wanting to express the cathartic experience of not knowing what’s next, but also reclaiming a naivety that I used to my advantage when in the early days of making music. The music on A Body Full Of Tears is the result of this, one of the easiest records I’ve ever made and also one of the most community minded too, which brings me happiness in light of the isolation we experience concurrently. The themes explore kind of continue the discussion of gender identity but also become broader too, taking on poems on mortality, sexuality, parenthood and intergenerational trauma into the album narrative too.

Could you tell us about your work as Alisha Sparkles?

SA: Alisha Sparkles is a very irregular project - more a remix pseudonym where I tend to explore my deepest techno and dancehall vibes using other peoples sounds. I did something live sets under that name that had more electro beats and steppas basslines with melodic and drone samples taken from Bangladeshi pop cassettes.

You’ve worked with GIO’s Raymond MacDonald in Sensaround - can you tell us about that project and do you hope to work together again?

SA: It’s a bit of indie nerd story for me LOL! I really loved the music of Future Pilot AKA and in particular, his album Tiny Waves, Mighty Sea, which of course features Raymond in a big way. Lo and behold, Raymond also was good friends and a collaborator of our Sensaround bandmate Alister Spence so imagine my joy when Alister asks if I can help him book a gig for their duo on their Australian tour! From there on, Sensaround has been one of my favourite things to work on. There’s no real conceit for any of us, it’s quite liberating to play with Raymond and Alister in that trio as the outcomes are born from intuition and deep listening. I really do think the records we’ve made together are some of the best things any of us have made and many of my favourite touring memories are with Sensaround so once we know more about the future of international travel, hopefully we will all be in the same room together again. We’ve only ever made music together in real life so maybe this is the chance to explore the digital life of our collaboration?

Hardcore nerding here, but Alister Spence was in Clarion Fracture Zone with Greenock-born saxophonist Tony Gorman and the Australian saxophonist Sandy Evans. Tony and Sandy have also performed with GIO, so it all joins up.

SA: Yeah absolutely. I love that Tony and Sandy Evans’ work gravitated towards the subcontinent, which is something I was always looking for in the music I listened to because of my Bangladeshi background - that’s what drew me to Future Pilot AKA’s music in the first place (via Cornershop, Asian Dub Foundation etc). Hearing Bill Wells was a big thing for me too, again via Future Pilot, and I really love the way he used samplers. Actually my connection with Bill is more through To Rococo Rot and Stefan Schneider, who I ended up sharing a split 12” with on my label hellosQuare. Hardcore nerding indeed!

You’re obviously a big fan of the Glasgow music scene. What do you find inspiring about it and do you have any particular favourites?

SA: This follows on from my big indie nerd life and meeting Raymond - one of my favourite bands is the Pastels so anything on the Geographic label got a lot of attention from me. Part of the post-punk discoveries were knowing more about bands like Orange Juice and Josef K as well - there’s a particularly strong connection between that era of Scottish music and Australian bands like The Go-Betweens and Moodists so again, that kind of exploratory anything goes musical spirit was always inspiring. Also, I’m a child of a particular era where Chemikal Underground and bands like Mogwai and The Delgados were making and releasing music in present tense as I was getting older and the distinct characteristics of their guitar driven songwriting seemed to translate in a particularly exciting way to my ears on the other side of the world.

Do you recognise any parallels with the scene in Canberra?

SA: As a student of scenes from afar and within, I feel like there’s a shared gang mentality to a lot of what drives both things at my end and what I might read and see of Glasgow music. DIY life is pretty core to me and my whole way of living and I always felt that was so easy to see in what I knew of what was happening or happened previously in Glasgow and how we do things here too. Make your own fun, get people energised, excited and all of that business I guess. A decade, I co-curated a compilation called The Sound Of New Young Canberra in homage to the term used for bands associated with labels like Postcard and Fast Product.

How has Covid affected your musical life? Have you taken part in virtual sessions via Zoom etc?

SA: Luckily it’s been a creatively fertile time for myself - creating new music along with the homeschooling duties etc - so I can’t complain to be honest. I’ve been lucky to have a number of great opportunities come up because of COVID so while I might have missed out on playing live in this time, I’ve been able to do work on recording projects as well as take up various virtual sessions, be it transmitted live sets from my dining table to doing group improvisations with the GIO gang!

Can you tell us about your set for GIOfest?

SA: As mentioned, I’ve not been able to play live per se so I’ve not done a proper album launch for A Body Full Of Tears. When Raymond invited me to contribute something to the GIOfest online program this year, I thought it would be a great opportunity to do something special for the festival but also a great opportunity to launch the album, so the set is a abstraction of sounds from the album remixed and arranged to bring out some of the sonic intricacies of the music as well as highlight some of lyrical themes in a different context.